The future of work: your robot coworkers

From the invention of the wheel and steam engine to fax machines and desktop computers, technology has always shaped the way we work - but in the last few decades, the pace of innovation has sped up exponentially, forcing employees and those who lead them to constantly blaze new ground and determine new paradigms for the way things are done. The biggest recent change in work and workplace culture is the introduction of robots.

This change has caused a lot of panic and unsettlement among researchers, pundits and everyday workers. There are many conflicting stats and studies that spell out doomsday scenarios for human workers, both in-house and outsourced, in the age of robotics: Forrester estimates that 22.7 million jobs will be displaced by 2025; the World Economic Forum estimates that it’s closer to 5 million jobs by 2020.

Forrester research suggests that robots will play an impressive role in the workplace, but in specific ways, such as reducing errors, taking on routine tasks, augmenting human intelligence, bridging legacy software systems and helping customers with self-service functions. In this scenario, humans will be complemented by robots and free to focus on tasks that need complex intelligence or judgment, involve higher-order thinking and/or require creativity. Rather than both trying to accomplish the same goals and becoming redundant, humans and robots will work alongside each other to achieve complementary goals. The same Forrester survey cited above concludes that by 2019, automation will change every job category by 25 per cent - meaning that “the greatest change for workforces will be in job and work transformation rather than job loss,” write Willcocks and Lacity.

Most jobs are made up of a mix of duties from both categories. While many low-skill jobs that are heavily made up of tasks from the first category are at risk for consolidation and elimination, many middle-skill jobs will continue to require a variety of duties across the spectrum, making these jobs good candidates for consolidation and transformation. With the routine, machinable tasks off their desks, human workers will have the freedom to devote more of their time and energy into the customer-service and creative aspects of their work. RPA adoption does not automatically mean reduction of full-time employee headcount; rather, many companies redeploy displaced workers, do more work with the same number of people or avoid hiring new workers internally. If employees can see that their jobs will improve due to automation, they will embrace the change rather than fight it.

Xchanging, a provider of technology-enabled business processing and procurement services, is a good example of a company that has made the best of a hybrid workforce. Xchanging turned to robots to streamline their processes. Xchanging still had huge amounts of high-volume, repetitive data collection and processing tasks, many of which were still done manually and required data from non-integrated legacy mainframe systems that needed to be cross-referenced. As of May 2015, Xchanging had deployed 27 robots for 14 core processes, netting about 120,000 RPA transactions per month. In addition to the cost savings, Xchanging realised that by having robots do these processes in a streamlined, error-free fashion, the robots’ human coworkers appreciated them, too. Xchanging employees so appreciated having the boring tasks they didn’t enjoy taken off their plates that they named their robot coworkers and drew human representations for them, and even asked if Poppy the robot could be trained up to do more work for them.

In today’s reality, the doomsday scenario of a world where robots do all the work, leaving an entire human workforce on the unemployment line, is just as unrealistic as a fully manual workplace. As robots become more of an everyday sight, we will see even greater transformation of the workplace landscape - transformation that will lead us to the next great innovation. 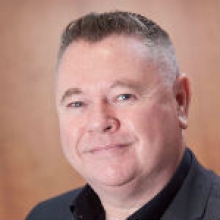 Pat Geary is the CMO of Blue Prism. He has over 20 years of international marketing experience across a range of large multinational and start up software and hardware businesses. Most recently Pat has worked as CMO at Skinkers, a UK-based enterprise software company; and CMO for Livestation - the world's first global news platform on the internet. Pat's previous experience included international corporate marketing roles at Searchspace, Sequent Computer Corp and DEC. He holds an honours degree in Computer Science.