Do You Want Chips With That? 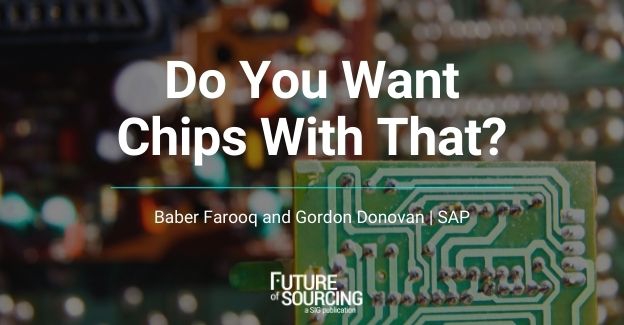 While the shortage of semiconductor chips has been dominating news headlines and roiling corporate earnings, demand for chips has been steadily increasing prior the COVID-19 pandemic. In this article, Baber Farooq, Senior Vice President, Head of Product Strategy, Procurement Solutions, SAP, and Gordon Donovan, Intelligent Spend Evangelist, SAP, identify the multiple factors that have led to the current crisis, discuss how we got here, and suggest how procurement and supply chain leaders can seek to avoid these types of events in the future.

The semiconductor industry has an atypical problem: everybody wants their product. Semiconductor chips are the basic component of the digital products used in our everyday lives, from mobile phones to televisions to washing machines, but it doesn’t end with consumer products. As many as 169 industries have been impacted by the current mismatch in demand and supply.

The effect on car makers has been widely reported, with several carmakers temporarily shutting down plants or announcing delays in production which drastically impacts their earnings. Some car lines have announced the elimination of high-end services requiring chips in systems like navigation and intelligent monitoring just to keep business going.

While the pandemic has not helped matters, it is not the root of the problem. Even prior to COVID-19, demand patterns were increasing for many reasons, including the emergence of 5G, automakers prioritizing electric vehicles, and the drive for ubiquitous internet access. These and countless more reasons led to an increase in the number of internet-connected devices that rely on semiconductors.

This article identifies multiple factors that have led to the current crisis, discusses how we got here, and suggests how procurement and supply chain leaders can seek to avoid these types of events in the future.

The chip shortage has been building since late 2020 due to multiple supply chain disruptions. The pandemic initially caused a drop in vehicle sales in the spring of 2020, leading automakers to cut orders of the chips needed for functions ranging from touchscreen displays to collision-avoidance systems.

When demand for passenger vehicles rebounded sooner than expected, chip manufacturers had already committed to supplying their big consumer electronics and IT customers, which had seen a huge increase in demand due to more employees working from home and children home schooling via virtual classes.

These factors had a significant impact on the demand for laptops, tablets, screens and more. In Q4 2020, computer sales increased 26% over the previous year.

CC Wei, CEO of Taiwan Semiconductor Manufacturing Company (TSMC) stated in April, “We are witnessing a structural increase in underlying semiconductor demand as a multi-year megatrend of 5G and HPC-related applications are expected to fuel strong demand for our advanced technologies in the next several years. Covid-19 has also fundamentally accelerated the digital transformation, making semiconductors more pervasive and essential in people's lives.”

This is great news for semiconductor manufacturers, but worldwide lockdowns led to the shutdown of chip production facilities causing stock to drain. Just as the world started to return to a new normal state, the delta variant hit South East Asia especially hard, preventing manufacturers from getting back to full production capacity at the pace required to catch up.

In the 1990s, 37% of chips were made in U.S. factories. By 2020 that number had declined to just 12% with China emerging as the new leader in chip production. Rising tensions between East and West compounded this issue for Americans. Sales of semiconductors to Chinese firms were restricted by the U.S. and those companies began stockpiling chips from other providers essential to 5G smartphones and other products.

At the same time, U.S. firms were cut off from chips made by China’s Semiconductor Manufacturing International Corporation (SMIC) after the firm was blacklisted by the federal government.

American automakers and medical device manufacturers have asked the U.S. government to subsidize construction of new domestic semiconductor manufacturing facilities. The government also plans to conduct a supply chain review of “critical and essential goods” to ensure proper measures are taken to manage this crisis and reliance on Chinese manufacturers.

Beyond the U.S., there is a rising effort to increase production from all corners of the world. The European Union (EU) has set a target to double its output by 2030. In 2020 it made 10% of the world’s chips. But 2030 is a long time off in the world of technology.

Even TSMC, currently the world’s largest semiconductor manufacturer, has increased its 2021 capital spending budget to U.S. $28 billion and is investing $100bn over the next three years to address the shortages. The problem is that the effects of these investments will take time, as there are no “quick fixes” to remedy this issue.

What seems to be continuous weather events have also added to the issue. A huge winter storm in Texas shut down semiconductor factories. Taiwan experienced its worst drought in more than half a century, leading to problems among chip manufacturers located there that require large amounts of ultra-pure water in their factories and clean rooms.

There are unforeseen events that also play a role. Last year a fire at a Japanese factory cut off the supply of a special fiberglass used in printed circuit boards. Earlier this year a fire at Renesas, one of the world’s largest chip manufacturers, deeply impacted its production and it has taken much longer than expected to ramp back up.

The Suez Canal blockage in March 2021, the lingering COVID outbreak and the shutdown of Yantian (one of the world’s busiest ports) inevitably resulted in significant shipping delays. Shortages of shipping containers resulted in companies having to pay premiums for shipping. The Wall Street Journal recently reported that the price of shipping a 40-foot container to the West Coast of the U.S. has jumped 63% since the start of the year to $6,341 according to the Feigtos Baltic Index. This is more than three times the price from the previous year.

Outrageous shipping costs such as these have driven demand toward airfreight, which was already taxed with high demand due to global shipments of the COVID-19 vaccine. In addition, capacity had been reduced due to the pandemic-related drop in passenger travel, meaning that there are fewer planes available to carry freight.

In fact, global air cargo capacity in the first quarter of 2021 is 25% less than last year. Factor in the grounding of the Boeing 777 fleet due to engine failures, and you have severe capacity constraints.

A 2017 survey of U.S. semiconductor manufacturers found that 77% experienced a talent deficit within the industry and 14% stated that by 2020 it would be critical. In Japan they are struggling to fill jobs that require expertise in AI, quantum computing and other advanced technologies.

But this will take some time and won’t solve the problem alone. China is struggling to fill 400,000 semiconductor engineering roles and the U.S., as part of its investment in the semiconductor industry, could create more than 12 million additional jobs through 2026.

Many organizations have pursued an aggressive lean-inventory practice that has left manufacturers vulnerable. Agile businesses, mainly electronics manufacturers, that had visibility into the bigger picture and longstanding relationships with semiconductor manufacturers have been able to continue with their production, while other industries have been forced to slow down, or even shut down, certain plants.

This supply base reduction has left many organizations without access to suppliers, as those relationships have been neglected.

What Are the Solutions?

Semiconductor suppliers are working to make up shortages at breakneck speed. From the buyer perspective, procurement functions need to have the ability to quickly and effectively, predict disruption in supply, and expand their supply base through a multi-supplier strategy to ensure alternate sources in these instances.

Treat Your Suppliers As Partners

It is all about relationships. Through an impactful supplier collaboration program, companies have an opportunity to remake themselves as extended enterprises, a model in which both their and their suppliers’ activities are so well aligned that they are able to avoid major supply chain disruptions, eliminate overlapping expenditures (including in R&D), and ultimately become more innovative and efficient.

Expand Your Supply Base

Until now, the global supply chain has taken on big risks with just-in-time manufacturing and global supplier contracts to maximize returns. But from this current crisis we have seen that organizations following a supply base contraction strategy have generally suffered more than those who had established a more diverse supply base.

In today’s tenuous business environment, it is beneficial for procurement teams to pursue a multi-supplier strategy, especially for key components. This builds in more agility and rebalances the offshore, nearshore and onshore mix.

According to a Deloitte CPO survey, nearly half (47%) of CPOs plan to expand their overall supply base. Of those who plan to expand, refining their geographic base was the top choice (31%), while a shift to nearshoring was the second choice (24%). Deloitte notes that companies are trying to reduce overreliance on a few suppliers in uncertain times, while also trying to locate suppliers closer to home to mitigate pandemic and international trade risk.

While the move to a multi-supplier strategy initially introduces more complexity, the benefits far outweigh the potential cost. The need then is for procurement to adopt technology to simplify the process and drive agility by choosing intelligent systems over inflexible and siloed systems. Organizations that embraced such technology and were further along in their digital transformation were the ones most able to adapt to the changes forced onto the global economy.

Digitalization allows these systems to “talk” to each other, from identifying shortages to finding new sources of supply to reviewing forecasts and exchanging information with supply partners. This two-way information sharing between the buyer and its suppliers is necessary for aligning risk management strategies and demand-supply fluctuations.

The need for procurement and supply chain leaders to understand the end-to-end supplier network and the risks that exist beyond their direct suppliers is essential. Driving visibility and transparency in the supply chain beyond tier one and into their second, third and fourth tiers is an essential part of managing supply chain risk. Only through a network approach can buyers fully achieve both that level of visibility and the ability to create the necessary communication flows to ensure a truly resilient supply chain.

As the world economic order continues to evolve and the fight against the pandemic rages on, governments and businesses will continue to be challenged with addressing supply disruptions in a manner that saves lives and dollars.

Procurement teams must continue to evolve and to serve as the strategic partner that they are required to be – and in doing so, will most definitely have to rethink the rules. 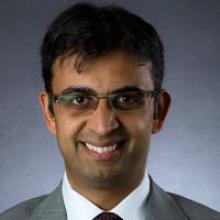 Baber has extensive procurement knowledge, and since joining SAP Ariba in 2006 has worked with customers across the globe, understanding their challenges, procurement transformation goals and their view of success. This customer facing background provides Baber unique insights into procurement organisations and supports the development of a customer centric procurement roadmap for SAP.

Baber joined SAP Ariba in 2006 in the United States. Since then he has held various director- level roles in overseeing procurement transformations across the world. Prior to taking on his current role, he served as the General Manager, Customer Value Organisation - APJ and Greater China.

Baber holds a Masters and Bachelor’s degrees in engineering from Carnegie Mellon University. Prior to joining SAP Ariba, he was part of the Engineering Design and Construction team for the city of Miami, Florida. He presently lives in Melbourne, Australia with his wife, daughter and Rottweiler. 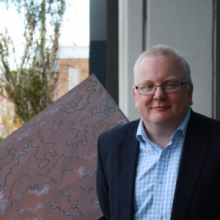 Gordon Donovan is the Director of Market Research for Procurement and External Workforce with SAP. He has over 30 years procurement experience leading transformations and establishing functions to deliver enterprise-wide value. Recognized as a thought leader in procurement, he is a sought-after speaker, writer, and presenter.

As director of market research for Procurement and External Workforce at SAP, Gordon tracks the latest procurement trends and forms insights that influence SAP’s strategy.

As the Threat of Lost Business Erodes, Supplier Hostility is Emboldened
06/08/2022