Almost twenty years ago, my son responded to the ubiquitous inquiry “What do you want to be when you grow up?” His interlocutor was his Italian godfather (the Milanese not the Sopranos variety). There were certain implicit cultural expectations about the response, the godfather being both a lawyer, an aristocrat and an exceptionally cultured Renaissance-man: doctor, lawyer at one end of the spectrum, bookended by painter, composer at the other with the (yes, stereotypical) accommodation to age and gender of train driver somewhere in-between.

Henry’s reply was immediate and authoritative. “Je deviendrai un fabricant de nuages.” (“I am going to be a cloud-maker.”)

We might have, literally, in that moment imputed to our progeny a prodigious early interest in the wonders of nephology, or at a minimum, Henri as the future TV meteorologist on France ‘s equivalent to CNN.

With anachronistic hindsight, we might have imagined a stellar career with Alphabet, Google or others as an innovator in externally sourcing data storage.

Our hypotheses would have been wrong. Our kindergartener was indeed fascinated by the process of using a remote network of servers. Impressed? I hope so. However, the servers in question, as Henry painstakingly elaborated at our prompting, comprised a cloud team of four ladies and two men. (No issue with diversity.) They wore white coats, gloves and hats (reassuringly clinical) and black wellington boots. (Safety-conscious). These cloud-servers toiled by night, gathering up the leftover white things from the day: tissues, paper, candyfloss, feathers, blossoms, meringues and such. They heaved this harvest into the Great Machine for transformation. (Enlightened cradle-to-cradle thinking.) While the Great Machine processed its inputs into nebulous outputs, the “team” hit the drawing board co-designing the cloud architecture. (That, in case you wondered, explains why clouds’ forms vary. Their shapes are inclusively and collaboratively crowd-sourced and then, once set free can change themselves. Because, and I quote in rough translation, “It is beautiful to make a thing that always changes.”)

When the auroral moment came, whoever’s turn it was (nice distribution of decision rights in this team) would press the release button and out they would float: “Rows and flows of angel hair, and ice-cream castles in the air, and feather canyons everywhere.” We can surmise Henry would have subscribed to a Joni Mitchellesque rather than a prescriptive World Meteorological Organisation (WMO) view of his cloud classifications. We might jettison the dire tired expression “thinking outside the box” if we were a little more thoughtful about choosing our boxes in the first place.

Self-evidently, this cloud-sourcing career, outside of my child’s imagination, did not exist but neither then did Chief Officers of Cloud, Data, Digital, Diversity, Customer Experience, and Innovation amongst others that now, and for now, do. Even CTOs and CIOs were barely emergent two decades ago in non-technology sectors. So before we smile with kindly condescension on the fertile fictions of the child’s mind, let’s be mindful that – recent, controversial studies on doomed professions notwithstanding – we can still only imagine what’s next. In business, innovation and imagination are not the same thing but they coalesce inevitably because innovating demands of us that we imagine that which does not exist yet.

Of course, in the context of innovation as a management science, “imagining” constitutes informed extrapolation from data, trends and, without doubt, some mind-expanding “what if?” intuitive thinking. Henry was not entirely wrong about the Big Machine and clouds, literally. Anthropogenic clouds, most of them noxious or malevolent, have been continuously created since the last Industrial Revolution. He could not have known that Russia began cloud-seeding the year his mother was conceived and I am guessing that even now he may be unaware that China created 55 billion tons of artificial rain last year. (His cloud phase passed as quickly as a SKUD in a thunderstorm). Henry’s methodology of making up the future will not translate unmodified into effective commercial innovation practice. But there is a lesson in it. What is and what might be are not bounded by what we know – a truth that our commonest management practices and our defensible but all too prevalent cult of expertise and experience-worship obscure to our cost.

“Dally” is not a word much used in business except by me. As an antidote to treacherous “Yes, but” thinking I often invite executives to dally, suspend disbelief, pause and play around with ridiculous ideas for a moment. Microsoft, Airbnb, Post-it Notes, Netflix were all at one point silly ideas measured against received knowledge. Until very recently, the notion of a proliferation of robots, autonomous vehicles and the likes of Siri resided in the realm of imagination. How quick is the leap from mind to market. Henry the four-year-old aspiring cloud-maker alighted presciently if inadvertently upon an insight now quite concrete for maturing Millennials. The “Great Machine” will indeed shape the future of work and remove an ever-increasing tranche of it from human hands. The partly flawed but frequently flung-around mantra of innovation’s purpose as “better, faster, cheaper” will irresistibly find fruition in the machine age of colossal computing power, big data, advanced analytics and AI.

A lot of us, over the last 30 years, have looked at sourcing, to borrow from Joni Mitchell again “from both sides now, from up and down” across a panoply of economic, social and political perspectives. A decade ago, I co-founded the Global Sourcing Council as a forum to debate and evaluate these myriad perspectives. Some of outsourcing’s promises in the global north and south have proved “life’s illusions”, others not. The debate on the seemingly binary question of exporting jobs or importing competitive advantage still obtains and is whipped into a violent tornado of rhetoric during cycles both electoral and economic. Contributors to this magazine have offered more informative and illuminating content on this multi-faceted dimension of our hyper-connected, globalised world than I ever could. But, the “Big Machine” will have a thunderous voice in this conversation as work moves inexorably not from continent to continent but from man to machine. In her cloud lyrics, Mitchell looks at life from “win and lose”. The adults in Henry’s story assumed almost two decades ago that jobs would exist that do not. Eventually, we resigned ourselves to the depletion of manufacturing and business process jobs but we did not see our jobs as underwriters, lawyers, analysts and writers going away. It seems that the future, like it or loath it, is becoming more evenly distributed (to remodel William Gibson’s aphorism).

My preoccupation in all this is innovation. Innovations got us here. Outsourcing qualifies as commercial innovation – at least in the narrow context of the 20th century notion of the firm organising its resources and processes to maximise shareholder return. Our 21st century challenges place a stratospheric level of importance on innovation. Every organisation, process and system is perfectly designed to do what it does, so if we want a different, better outcome it is a design question. Good design begins with questions – as all human progress does – and the process of invention requires us to percolate those questions through our imaginations. The exhortation to innovate in business is often as amorphous as a shifting cloud. It is remarkably childish to wish for what we want. We must deliberately and attentively build it as a corporate competence. Strategic innovation is the science and art of creating commercial value which did not exist before, sustainably and scaleably. Innovation as a management practice is a discipline that will be nourished or starved by organisational design.

I have researched and studied strategic and tactical innovation for a very long time.
One insight is that the celebrated 20th century management practices that we still retain utility for managing – counting, controlling and predicting things – are often the enemies of innovation. This is problematic since we promote good managers to leaders in whom then the innovation responsibility is concentrated. Similarly our race to answers vigorously instilled in us educationally, and by organisational norms, can dangerously propel us either to increasingly elegant answers to the wrong question or to receptivity only to those responses within our preconceptions: doctor, lawyer, train-driver. In corporate environments, consciously and unconsciously, we self-edit. We constrain the one competence that the machine, however big, has not: imagination. Creative thinking is a limitless resource and a vibrant source of competitive advantage squandered every day by conformist cultures where daring and difference are dangerous.

I compared an imaginative view of clouds with the strict and rigid taxonomy of the WMO. Its International Cloud Atlasserves a specific purpose for meteorologists and restricts itself to clouds of “operational significance” in disclosing atmospheric conditions. This is scientifically apposite for the WMO and what it needs to get done. Management, however, is both art and science. A company is more than incorporation documents and share certificates. The science of innovation is not fluffy stuff but does need to heed Thoreau’s “What kind of science …is that which enriches the understanding but robs the imagination?” Answer: not the right kind for what modern executives need to get done.

I could perhaps have avoided decades of study had I more carefully contemplated the organisational attributes implicit in little Henry’s business: diverse and inclusive, appropriately clinical, shared identity, safety conscious (i.e. impact aware), enlightened by cradle-to-cradle sustainability, team- centric not ego-centric, co-creative and collaborative, purposeful and finding beauty in change. Oh, and impossibly aspirational… But as the change master and consummate leader Nelson Mandela observed: “Everything is impossible until it is done.”

Those of us who have been children are, without exception, innovative. All we need is an environment in which to innovate. We need to imagine and make a workplace where the release button on our uniquely human qualities is pressed every morning and sets them free. I hear Wellington boots and white hats are a good start. 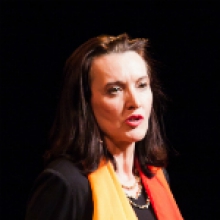 Karen A. Morris is a Board Member, a co-founder and director of The Global Sourcing Council, a not-for-profit committed to economic and sustainable best practice in global sourcing. She is a strategy consultant, specialising in innovation and growth, and has designed unique methodologies and metrics for all aspects of commercial innovation; these have benefited diverse organisations around the world. Karen was AIG’s first Chief Innovation Officer and has supported businesses, not-for-profits and governments with their innovation agenda. An English barrister, Karen has over 25 years’ experience in law, management, underwriting and multinational business. This diverse international background inspires her insight on product, service and business model innovation. She is a frequent speaker and writer on Innovation, Sustainability, Leadership, and Ethics. Karen has served as an adjunct professor on the MBA program at Fordham University in New York teaching Innovation and customer-centricity. She has been a visiting lecturer at universities in France and Spain. She served on the Advisory Board of The Howe School of Business at The Stevens Institute of Technology and of The World BPO Forum. She is also an advisory council member of The University of Colorado’s RMI School, and a Senior Fellow of The Institute for Innovation in Large Organisations.