ESG Risk Assurance – An Opportunity for Transparency and Trust 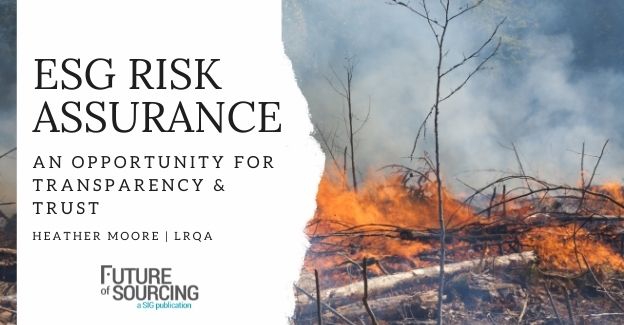 Building trust in ESG is complicated by the lack of transparency and consistency in reporting practices, the pace of change in reporting requirements, and huge regional and corporate variations says Heather Moore, Sustainability Technical Director at LRQA. She shares how the right insight makes it possible to develop reporting practices that stand up to stakeholder scrutiny and future-proof businesses against ever-evolving regulations.

Customers, employees and investors are increasingly putting ESG front and center when making decisions about the companies they engage with. Rising shareholder and consumer activism, as well as new forms of regulation, mean that it is no longer enough to simply state good intentions. The challenge is to prove to stakeholders that policies and initiatives are translating into meaningful action and impact.

The currency at stake is trust, arguably the most important asset of any business or brand. To establish trust, third-party corroboration is key.

Standards set by bodies such as ISO have long been established as marks of trust and integrity. In the world of sustainability, verification and assurance standards such as WBCSD/WRI GHG Protocol, ISO 14064, SASB, and TCFD are widely recognised by investors and stakeholders and support the comparability and transparency of reported ESG data.

The problem is that the material topics for each industry can be so varied that there are no globally recognized standards for many of the requirements. In fact, there is still much international debate on the definition of the word “sustainable,” which “environmental” measures should be tracked and what exactly “social” responsibility should cover. So how can businesses evaluate their performance against robust benchmarks?

The fastest progress being made is in the area of carbon tracking, with concerted efforts to establish agreement on measurement and science-based targets concentrated around UN climate change meetings and being driven by organizations such as CDP – a global non-profit that runs an environmental disclosure system for companies, cities, states and regions.

At COP26 in Scotland, the International Sustainability Standards Board (ISSB) was launched as an independent, private-sector body that develops and approves IFRS Sustainability Disclosure Standards. This will undoubtably help to increase transparency when it comes to accounting, but it has been recognized by many observers, such as Jason Saul, Executive Director of the Center for Impact Sciences at The University of Chicago, that much of the focus on ESG performance to date has been on those outcomes that are most easily measured and quantified by the world of finance.

For both social and environmental impact, there are many more activities and measures that go beyond the balance book, including health and safety, well-being and responsible sourcing. This is not just a question of compliance; many companies undertake pro-social policies and behaviors that positively impact lives and the environment. It is these actions that do the most to establish brand purpose, driving competitive advantage and business growth. However, such social impacts are often not widely measured in ESG data, leaving the “S” overlooked.

All businesses are at different stages on their journey and there is not a one-size-fits-all solution that can be applied. In the absence of global consistency, businesses can seek to establish an assurance strategy which takes into account their own progress as well as that of their industry and comparable sectors.

Organizations that correctly identify material topics in its industry and develop internal policies against measurable targets and goals to reflect its declared values and position in its journey toward sustainability will generate trust with its stakeholders. They will also be able to demonstrate actions with progress audited against baselines that are set in line with its policies.

Policies developed in this manner allow organizations to maintain visibility, not only of its own impacts, but also of its own suppliers and sub-contractors further down the chain. This provides an opportunity to prove wider positive impact and leadership beyond the immediate responsibility of an organization, while building stronger relationships with suppliers and establishing more agile methods of achieving quality and control.

The process of operating to, and being independently audited against, these measures enable better monitoring, understanding and management of performance. This ensures that efforts are made in the right areas of the organization that will have the greatest positive impact.

Businesses that can establish robust ESG auditing will be well placed to anticipate new regulation, without being shaped reactively by it. A good example of this is the EU’s proposed directive for mandatory human rights and environmental due diligence across global value chains. The proposed directive could result in costly penalties for businesses and directors for non-compliance and include a civil liability regime to allow victims to sue companies for harm resulting from the company’s failure to comply with diligence obligations.

There is more reputational value in moving ahead of such initiatives, while still in their early stages, by demonstrating positive behavior before others follow suit in compliance. Designing and adapting risk assurance programmes based on expert knowledge of variations in international policy will protect these investments made in reputation once regulators and competitors catch up.

Don’t Get Left Behind

To gain first-mover advantage, businesses that want to achieve the greatest return on their ESG strategy need to establish robust methods of measurement and assurance now. The alternative is to remain reactive, forced by regulators to move later, risking reputational damage and playing catch-up to remain competitive in an increasingly ESG-focused world. 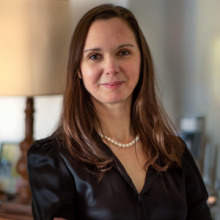 Heather is Sustainability Technical Director for LRQA, a leading global provider of digitally enabled assurance services. In her current role, she helps clients understand and meet their ESG reporting requirements. She started at LRQA as a verifier and has audited innumerable industries’ data management practices. Her 16+ years of experience in the environmental field have taken her to landfills, power plants, cruise ships, upstream and downstream oil and gas operations, chemical plants, hospitality, agricultural operations, and various manufacturing facilities. She holds a BSc degree in civil engineering from Purdue University.