Sin to cross the oceans? 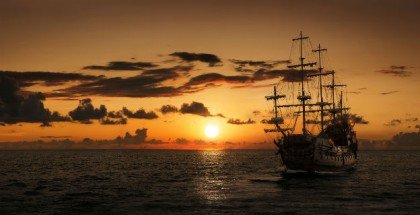 Our ancestors in India always told us that it was a sin to cross the oceans (and many in India do not cross oceans even today). There was something about globalisation that they just did not like and I have not been able to figure out what it is.

But, it is playing out now and I am getting a glimpse of their wisdom. When business started globalising and multinationals sold their goods/services in other countries, there was euphoria in the developed countries. However, over a period of time, multinationals realised that they needed to make their products more affordable. Though prices needed to be lower, they realised that demand was growing faster in these markets. The developing countries also had customs and duty tariffs that became barriers. So, multinationals started manufacturing in those countries and the first form of outsourcing started. We can see the ripple effect of outsourcing now in recent elections in developed countries, as decades of the outsourcing of manufacturing and services has left only uncertainty there.

As business grew, technology had to get better - and as technology got better and better, business models started changing. Over the years, digital disruption has made it easy for funds to be transferred across the world in seconds. Banks and banking regulators have struggled to keep pace with these changes. This has resulted in terror and drug money being moved across countries at rapid pace. While talking about the spread of a particular religion during the 1980s, one Middle Eastern leader said, “We will take over Europe without firing a shot.” The increase in violent terror attacks in that continent has got people worried - and they are increasingly sending a message to their governments that immigration has to stop.

When years ago Americans called for a stop to outsourcing to Mexico, China and India, the first shots were fired against globalisation. However, Al Gore lost the election narrowly to George Bush despite his rants on outsourcing. Nothing happened during the Obama years and companies merrily outsourced. When Trump stood in front of a Ford factory in Florida (then being shifted to Mexico) and said that if he was elected president he would increase the customs duty rate of cars imported by Ford from Mexico, he was cheered very loudly. The Americans were showing their anger. Trump won - and time will tell if this anger has won.

The 2014 Indian elections, Brexit, Trump’s win and now the possible victory of right-wing politicians in Austria, Italy, France (Sarkozy has lost the primaries in the presidential race in his own party to a person who is far more rightist than him in his thoughts) all are signaling a new era. As my friend put it beautifully when he predicted a Trump victory long before the US elections: “I don't think the polls accurately capture the populist sentiment in the country. I think there is a great fear of change… We have a man acting as a lightning rod for these sentiments.” In many European countries, including France, Belgium, Germany, the United Kingdom and the Netherlands, various concerns have led to calls for restrictions on immigration. India is witnessing a huge upsurge of populist feelings as many voters are tired of minority appeasement politics that they have seen for the last seven decades - and also laws that are not in favour of them. The mood is swinging from left to right; there are no takers for the middle path.

I believe that the new economics of the world will be driven by the cost of technology and energy. Alternative fuels and the increasing use of solar and wind energy will result in the Middle East slowly facing turmoil as oil prices go down. My friend Chandrakant Patel told me this years ago: the cost per joule will decide how outsourcing will change to insourcing. That is already happening. Technology is breaking business models. Increasing robotisation and artificial intelligence will force countries to relook at their skill mix. The cost of labour will not be the decider: the overall cost of energy will be. We are already seeing this play out in China and India as many companies shift back their operations.

What can throw a spanner in the works for the Americans and Europeans? Their own (mis-)understanding of demographics. Falling birth rates mean an ageing population and the need to import fresh skill sets from other countries. Further, to sustain those ageing populations, they need to import younger people. Immigration has been allowed to happen from Africa into most of Europe and from South America into the USA. If the USA and Europe do not increase their birth rates and also get the correct skill sets going, the movement of labour will continue to dog these economies - and the problems related to immigration will continue.

As countries raise their walls to prevent outsourcing and immigration, people from developing countries may well end up deciding that it is not worth crossing the oceans. Innovation will become key to the long-term sustainability of nations. I can already imagine a world where self-driven cargo ships and cargo planes criss-cross the world; maybe, eventually, the producers of Star Trek will be in demand as goods/services can be teleported across the world: “Beam me up, Scotty.”

Ravichandran “Ravi” Venkataraman is the Founder of Alive Consulting, specializing in leadership development and shared services consulting. He is a leader with a track record spanning 30+ years having worked in India, London and Bahrain. Leading large, remote, multicultural teams, developing and executing business relevant strategies and developing key talent are Ravi’s core competencies. He is also the Director &amp; Co-Founder of Floretz Academy which manages two Montessori Schools in Bangalore; and a Trustee in eVidyaloka, a non-profit social enterprise in to remote education for rural children in India.Previously, he was the Senior Vice President of HP’s Global Business Services managing a multi-function shared service covering finance and accounting, human resources, supply chain, order management (product and services), marketing and communications. He led a team of 18,000 people spread across 14 global centres and co-located in 58 countries. Ravi joined Hewlett Packard from ANZ Bank’s global back office where he was the Managing Director, responsible for managing a team of over 5,000 in technology and operations.He blogs at www.ravi4corners.blogspot.com and has a YouTube channel: Leadership in Real Life - https://www.youtube.com/channel/UCKEt8T9e4KKyeKjNB20tbag

Are You Getting the Most Out of Your Nearshore Digital Transformation Partner?
02/04/2021