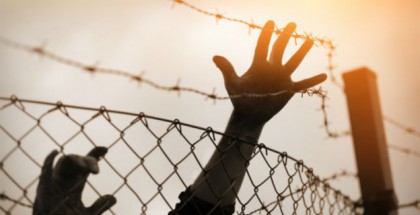 Little more than a week into his presidency, and Donald Trump has already taken plenty of steps to ensure that anyone hoping or fearing that his more aggressively populist pre-election promises were merely vote-summoning rallying cries that would be forgotten were he to be elected will have their doubts dispelled. Most immediately controversial - thus far - has been his executive order issuing a temporary ban on immigration from Iran, Iraq, Libya, Somalia, Sudan, Syria and Yemen, which despite denials from the President and some of his officials is being seen as targeting Muslims, in line with his campaign statement calling for a "total and complete shutdown"of US borders to practitioners of that faith.

An American president and government openly discriminating, in 2017, against members of any particular religion, let alone one with well over a billion adherents (including millions of Americans) would be a truly remarkable development, and one with vast ramifications for the world at large. It remains to be seen just how far the Trump administration is prepared to go to back up the new commander-in-chief's more virulently anti-Islamic stump pronouncements. What is already clear, however, is that Trump is prepared to place immigration reform - perhaps "transformation" might be a better word - at the heart of the first phase of his presidency: along with this executive order, his first ten days in office have seen confirmation that his most notorious campaign commitment - the building of 'The Wall' on the US-Mexican border - will also become reality.

President Trump is well aware that for the majority of those who voted for him last November immigration is a - if not the - key issue, tied in with unpopular trade deals as the major contributing factor to industrial decline in the battleground states whose voters - predominantly white, blue collar workers - turned to him in their droves. The extent to which these factors are actually responsible for this decline (and, going forwards, to which tackling or even reversing them will have any chance of turning that decline round, in the face of a global automation revolution with the potential to rip up the rule book altogether) is somewhat irrelevant for Trump, who knows that it is the superficial and visible which counts: if he can be seen to be "doing something" about the betes-noires of his core constituents they will continue to love him at least for long enough to get him reelected - if that is even his ambition at this point - regardless of whether or not his actions have any significant impact upon what those constituents see as being the downward spiral of American industry.

This is worrying indeed for the international outsourcing industry (including, counter-intuitively, more than a few homegrown providers), many of whose members now stand in the firing-line at least twice over: firstly, because "doing something" about outsourcing (which in the mind of the average voter is synonymous with "offshoring", itself little less than treason in many eyes) is a populist no-brainer, and a restructuring of the USA's trade policies into a more isolationist framework could have serious consequences for everyone in the space (and, of course, for the global economy generally); and secondly because cracking down on immigration could cause severe problems for organisations the success of whose operations in the USA depends upon their ability to bring in key talent from outside the country.

The H-1B visa - as per Wikipedia, "a non-immigrant visa [which] allows US employers to temporarily employ foreign workers in specialty occupations... and requiring the attainment of a bachelor's degree or its equivalent as a minimum (with the exception of fashion models, who must be 'of distinguished merit and ability')" - in particular has come under significant fire from many observers who see it as open to numerous abuses: such critics charge that outsourcing providers are able to undercut their US competitors (and, of course, in-house/insourced alternatives) by bringing in foreign workers who are paid much less than their American equivalents. This is, of course, a biased perspective and the H-1B program is not without its merits; nevertheless, it's the sort of high-profile, controversial target which Trump could tackle boisterously to much cheering and the waving of flags, without having to discuss the issues which led to its adoption in the first place and which are hardly being wafted away by all those flags: an ongoing skills shortage and the ability of specialists in places like India, China and many others to provide good work at a fraction of the cost.

Clamping down on immigration, the offshoring of work and anything else affecting the ability of the average Joe in the USA to get a job will only stand a chance of benefiting the national economy if the solutions are correctly thought through. In the case of the H-1B visa, for example, enterprises need certain work done and outsourcing providers are able to ensure that it is carried out well at an acceptable cost; pulling away that visa program will be akin to yanking away the carpet underneath the feet of those organisations unless they can find replacements to fill those roles at a cost which isn't prohibitively high, otherwise either the work doesn't get done - catastrophe - or their wage bills go through the roof - less catastrophic in the short term but a significant problem nevertheless, and inflationary at a macro level. Are the skills available in the USA to mitigate a serious assault on white-collar, as well as blue-collar, immigration? The debate is ongoing. What isn't really up for debate is that with every increase in uncertainty in this area the value of automation is enhanced - the more work that can be done by robots, the less exposed employers are to volatility in the talent arena (who cares who Trump does and doesn't let into the country if none of the employee base is a human anyway?) - driving more and more work ever further into the electronics arms of the robots, and ever further away from disgruntled, Trump-voting wannabe-workers in the Rust Belt.

Joining me on my panel for the first Outsource Talks webinar of the year (Weds Feb 15, 10am Eastern/3pm UK: register here) will be, among others, Simon Boardman of US onshore BPO and ITO provider Eagle Creek, a passionate opponent of the H-1B system who will be keen to engage any attendees on the topics of immigration, visa reform and anything else impacting this area. While we don't, of course, have set themes for Outsource Talks, we'll definitely be devoting a portion of the show to this discussion, so if you'd like to participate - or simply listen in - join us then: you can send your questions to the panel to me in advance of the show at jliddell@sig.org, which is also where I will be happy to take any ideas you may have for articles on this topic - a topic which I expect will only grow in prominence over the course of the coming months and years.