2016 has presented the British labour market with some of the most worrying forecasts and challenging new laws the country has seen in a long time.

Halfway through March, George Osborne announced the Office for Budget Responsibility’s GDP growth forecast, which highlighted that the UK economy will grow more slowly in the next five years than previously expected. The reason? The OBR forecasts a rather worrying reduction in productivity.

On April 1st, employers stepped up to the National Living Wage, increasing wages by 50p to those aged 25 and over to make for an hourly rate of £7.20. For many employers, particularly those in the retail and hospitality industries where the pay rise was widely applied, the impact has been significant. By 2020, a National Living Wage of £9 is set to be introduced.

So are employers destined to deal with continued mandatory pay increases amid reduced productivity? For many, it’s a fear already recognised, with reports coming out in the weeks that followed the National Living Wage coming in to effect surrounding employee benefits being cut and prices are being raised.

Employers are quickly realising they’ve got to make employees more productive in order to stay profitable in this new climate, and that this cannot simply be done by expecting employees to do the job of two people or working past the end of their shifts in order to aid productivity.

This brings us to robots and specifically, to automation. Far from “the robots are stealing our jobs” message that we see in the news so frequently these days, there could be a real upside to applying robots in the workplace to assist employees on the National Living Wage aspire to new levels of productivity. We’re not suggesting they replace employees, but they could go a long way to helping the productivity problem.

By taking care of the mundane and repetitive tasks, robots could just be the missing link for increased productivity. No longer bogged down by admin, employees may become better, more productive employees focused on value-added tasks. They may also get more customer face time, which is invaluable. This is a prime example of using technology to improve the customer experience, and one businesses are beginning to consider as robotic process automation moves in to the mainstream.

Simply put, robots don’t need to be paid the National Living Wage and they are even cheaper to implement than onshore and offshore Full Time Equivalent (FTE) employees. While an onshore FTE costing $50K can be replaced by an offshore FTE for $20K, a robot can perform the same function for $5K or less – without the drawbacks of managing and training offshore labour.

Your robotic automated workforce won’t get benefits anyway, nor will it impact them if some cost cutting does have to incur while the business adapts to the National Living Wage.

Beyond that, they can work 24×7 without ever taking a sick day, and won’t suffer a lack in productivity parallel to extended working hours as humans do. While the human workforce gets a well-deserved rest, the robotic workforce can make sure that everything possible is being done to ensure productivity doesn’t dip.

Continuity in a changing world

With rules-based processes being automated, industries with high turnover such as the retail and hospitality industries may find that they gain a newfound continuity never before experienced. As employees on the National Living Wage experience better job quality and increased productivity due to the assistance provided by automation, they will undoubtedly look to move up the career ladder. In this instance, robots could provide a strong foundation for business continuity which has been lacking.

Businesses may well be struggling with the advent of the National Living Wage, but those who choose to explore innovation and applied technology will no doubt be best placed to make for more productive, happier employees. The productivity forecast may have been a downer, but it’s only a forecast after all, and we’ve got the tools available to us to change it.

Here’s to a future where the National Living wage contributes to well-being at work and where technology continues at its rapid pace to deliver new solutions to help us all become more productive. 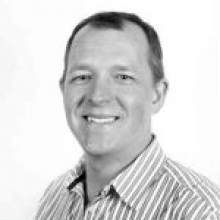 James Hall is CEO at Genfour, the robotic process automation (RPA) and AI specialist. He has over twenty years’ experience in B2B services outsourcing, working first with Accenture, then Exult/Hewitt, IBM and most recently with Capita. His primary focus has been to lead large complex business process outsourcing arrangements, working across both the public and private sectors. More recently he developed a strong interest in next generation process improvement through robotic process automation, after introducing this into Capita’s operations. The results achieved encouraged him to found Genfour to share his experience and knowledge with end user clients.