The robots don't want our jobs! 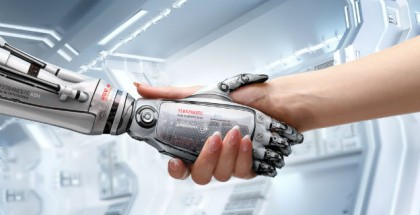 Robots hit the headlines over many national and industry outlets this week. The clincher statistic, as reported by Bloomberg, The Times, and most of the international press, is that over five million jobs will be lost by 2020 as a result of developments in artificial intelligence, robotics and other technological change.

So are the robots going to be taking away your jobs? Firstly, the 5,000,000 job loss statistic is taken from a survey of 15 economies covering about 1.9 billion workers, or about 65 per cent of the world’s total workforce. 5m from 1.9bn looks relatively small. Secondly, the statistic refers to AI, robotics and other technological change. So it’s not just the robots.

Although not as scary as the original statistical forecasts predict, perhaps we do need to be prepared for a disruptive evolution to the labour market, the likes of which we have seen before. These changes are nothing new; in 1860, 80% of the world’s population was employed by agriculture. By the end of WW2 that had dropped to 40%, and now as few as 2% of the working population are involved in agrigulture in the most developed economies such as the UK.

People still have jobs, they just have different jobs

The challenge with new technologies is the expected dramatic shift in what people will be doing over the next 15-20 years. Our job mobility has to keep speed with the technological change. It’s a simple fact that technological change extrapolates the speed at which technology change. Just look at how many centuries we had to wait for the telephone, before waiting another 100 years for a workable mobile version. Yet within 20 years of the debut of the mobile phone, smartphones emerged. Now imagine the same acceleration in progress with robotics and AI.

People will have less time to re-skill, so we have to have the foresight to create the infrastructure to deal with this change.

When we look at business practices today and how they could be affected by automation, we see that the threat may not be as provoking as the headlines suggest.

Much of the work that the reports focus on covers administrative roles that are primarily rules-based, repetitive tasks. For many companies this already has been, or soon will be, moved offshore. We fear for jobs that are going to move anyway. With automation, this work can be brought back onshore, and jobs will be retained or recreated in the management of the automation.

Automation will mean more productivity with fewer people. The real challenge is: how quickly can people re-skill and adapt to create more from this technical opportunity?

A unique opportunity for women?

One group that is likely to be most affected is women. Women are likely to feel the impact more strongly because they are under-represented in job sectors that are expected to expand, such as computer science, engineering and other STEM (science, technology, engineering, mathematical) professions.

Nonetheless, Saadia Zahidi, head of the global challenge on gender parity at the World Economic Forum, argued that the shift could be used as the catalyst to encourage more women to enter STEM professions.

“There is a unique opportunity to address long-existing gender divides in the economy. If we don’t take advantage of this, we will see more gender segregation in the workforce, affecting wages and livelihoods, not to mention greater economic inequality in society as a whole,” she said.

When the baby boomers retire

The other big workforce issue to consider is that the onset of robots might go some way to mitigating the impact of the retirements coming over the next ten years. An astonishing one-third of the workforce will go into retirement in the UK, for example, but only a fraction of their replacements are coming through the education system in the UK. Industry will need to address the gap without necessarily opting to attract talent from other countries, as will have to be the case otherwise.

So the potential impact of automation and AI could be as positive as it is negative, the only difference being that the positive is not necessarily as headline-making. The fact is, automation and AI will massively increase demand for people with the right technical skills over the next 15-20 years.

The older skills of keeping the old systems alive will need to shift to a proliferation of development skills and new technologies. The overall goal is to make technology easier to work with, enabling people without technical skills to put ideas into motion.

The solution, as authors of ‘The Future of Jobs’ report WEF founder Klaus Schwab and managing board member Richard Samans, say, sums up where industry focus needs to be: “It is critical that businesses take an active role in supporting their current workforces through re-training, that individuals take a proactive approach to their own lifelong learning and that governments create the enabling environment, rapidly and creatively, to assist these efforts.”

So, what is our advice to business leaders? Embrace the new technology. Embrace it and map out how what your digital workforce might look; for the good of the business, its people, and, quite likely, the planet, in our new and automated world.