RPA in Action at the SIG Summit: It’s Not All About the Robots 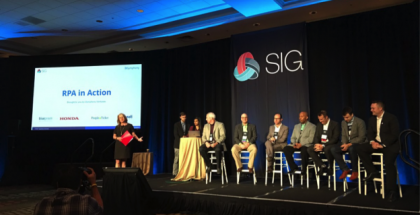 Many have heard of RPA and have seen presentations or reports extolling its virtues, but it is a completely different experience to see it in action and understand the mechanics of how it truly works. This idea was the driving force behind the concept of the RPA in Action project, a joint effort between Honda, SIG, PeopleTicker, Denali and Symphony Ventures to provide a participatory and educational RPA experience for SIG Global Summit attendees. As a SIG member, Honda was an appealing testbed. “There was a cumbersome, manual, disconnected process with multiple system interfaces required – the perfect setup for RPA,” says Bill Harris, Director of the Strategic Procurement Group at Honda, who accepted the proposal. The challenge to automate a part of their Talent Acquisition processes was on. Symphony was there from the beginning of discussions with Honda, collaboratively shaping the vision of the project. The scope not only had to be challenging, yet feasible, but also comprehensive, yet engaging.

It was a slow start for Honda, according to their project lead, John Bookmyer. “We were trying to get our head around what Symphony was trying to do,” he says, referencing the process of understanding the project scope and process definitions. Bill Harris notes that it was challenging at first to connect with all the individual stakeholders involved in Honda: the HR team, the IT team and so on, because the initial time commitment was limited. However, once communication opened up, the different stakeholders were able to discuss the project and everyone, Harris stated, “had a better sense of what we were trying to achieve.”

According to Symphony lead Ian Barkin, “The Honda team was very open and supportive.” After understanding the scope and the approach, Honda provided a detailed Standard Operating Procedure (SOP) as well as an overview of the process. Employing the SOP in conjunction with process walkthroughs, Symphony was then able to map the process of interest at a keystroke level, capturing the detail necessary to develop an RPA solution. To give you a glimpse of the complexity of this project, the team had to work with and through:

“There were some obstacles,” says Talent Acquisition team manager at Honda, Casey Kirk. He recalls that one of the company applications provided a tough challenge. “Due to the nature of the PeopleSoft system, we couldn’t grant access to Symphony without compromising our security standards.” He was concerned that the lack of access to a critical system would be a show stopper. However, the Symphony team bypassed the obstacle by creating a workaround HR application instead, allowing the project to move forward. “We hire the best and brightest, so I thought it would be a fitting challenge to let a group of rookies tackle the problem,” Symphony’s Americas Operations Director, Eleas Wilson recalls. “They exceeded our expectations and created an HR application that had functionality relevant to the process.”

After two full days of work by the US Symphony team at SIG, with overnight support from Symphony’s Robotic Operating Center in Poland, the RPA solution was unveiled on the final day of the SIG Summit. It wowed the 350+ attendees who had gathered to watch it, and the team members involved were pleased as well.

For Ian Barkin, the project showed that “it is in fact possible to build robots live in front of a studio audience.” He added, “The team worked very well together, which was the foundation for this effort’s success. We greatly appreciate the support and commitment from SIG and the whole Honda team.” Bill Harris notes that the pilot “was able to integrate across a much wider platform than anticipated, as well as take care of deep-rooted issues in the multiple disconnected processes and duplications of work. We are already talking about 2-3 applications where it could have a direct effect just for our department.”

According to John Bookmyer, “We quickly learned from each other and we ultimately learned a lot from the project. The wheels have been spinning in my head ever since I saw the proof of concept.”

“I think this is just the beginning for RPA and automation,” says Casey Kirk. “Looking at the project and interactions as a whole…this is definitely something we want to keep on the forefront of, and leverage with some of our other business practices. Through this process, there is an opportunity to learn from one another, and also help each other and take on these issues collectively and collaboratively.”

The final presentation of the completed RPA solution, presented by Symphony Ventures, accompanied by the project leads of the various stakeholders.

The Roadmap to RPA

If you’re interested in RPA, you might be wondering what made this experimental voyage at SIG an outstanding success. Symphony attributes it to a clear, practiced approach that helped align stakeholders and guide the implementation every step of the way. The ‘Roadmap to RPA,’ used by Symphony on its various client projects, highlights the tried-and-true methods to approach an RPA implementation. While the proof of concept demonstrated at SIG was not ‘production ready,’ it still adhered to the key principles outlined below:

As Bill Harris noted, the project started off slowly because it took a while to identify and loop in key stakeholders. Talking to the relevant people early on provides a strong foundation of resources to work from. The key here is to make sure each stakeholder understands what RPA is, and the requirements associated with RPA, so they know what to do and how to support.

Step 2: Get IT educated and onboard as early as possible

For Honda and many clients in Symphony’s experience, the people in IT were the ‘gatekeepers’ during implementation. Make sure the IT team is educated on your RPA initiative and are aware of the tasks at hand. Often times, integrating RPA robots into company systems takes more effort and time than expected, so get them prepared early on in the process. Additionally, loop in related divisions like Information Security, to avoid getting held up by any possible concerns later on (perhaps too late) in the process.

A successful RPA solution requires constant communication between SMEs and developers. This is why Honda’s Casey Kirk and Bill Harris were closely involved throughout the project. Whether it is mapping out the as-is process or developing the to-be process map, it is imperative to have an expert to verify and sign-off on each component. This will ensure that your working standards are up to par and that the solution is as thorough as possible.

Test everything. RPA involves many interconnected systems, operating across various environments. To ensure smooth deployment, align your test and production environments as closely as possible. Then, make sure to be very thorough. You will need extensive exception management testing. Involve SMEs and conduct user acceptance tests. This will mitigate potential errors and facilitate faster adoption of the RPA solution among the personnel involved.

Step 5: Make the necessary preparations in advance of deployment

When it is time to deploy, make sure you have checked off each of the prerequisites to going live. Communicate with other departments upstream and downstream of the automated process. Involve and educate related functions so they can be prepared to adjust to the new workflow. Finally, consider alternatives to an immediate, full deployment. A gradual or phased deployment could help create a smoother transition from a human workforce to a digital one.

Step 6: Keep an eye on the automation

After deployment, you should keep up with the automated process to ensure that it aligns to your expectations. Make sure you have a quality plan that outlines the predicted metrics of the project and closely audit the process to find any discrepancies. While at it, look for continuous improvements in the process that could be made.

Step 7: Analyze the impact of RPA on your overall workflow

Avoid unanticipated effects by considering the full impact of the RPA solution. If an order entry process drops from taking all day to just a couple hours, then the processes later in the stream will be significantly impacted. You don’t want to end up simply moving a bottleneck from one process to the next. So, look at areas to improve or automate adjacent to the process at hand. This will save you trouble down the road and improve your workflow while at it.

Following the steps outlined above, Symphony was able to coordinate key resources across stakeholders to pull together a powerful proof of concept at SIG. The underlying principle is to be prepared before, during, and after any foray into RPA. As a result, you can expand your vision beyond a project-by-project basis, drive holistic transformation and truly embark on the future of work journey. 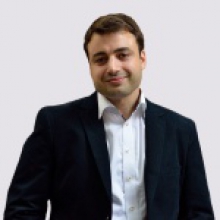 David Brain, COO, Symphony Ventures, is a process and automation expert who has gained recognition as the pre-eminent expert in Robotic Process Automation and was named ‘Consultant of the Year 2016’ by the Global Outsourcing Association for his work in transforming global enterprises through the deployment of automation technologies and methodologies. As COO, David has built, and now continues to lead the global consulting, implementation and managed services teams within Symphony Ventures ensuring flawless solution design and execution on every engagement.